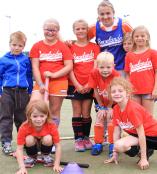 Frederique Derkx has played for Oranje-Rood in the first ladies team since 2012. In the same year she was selected for the Dutch womens field hockey team. She just did not make it to the London Olympics of 2012, but after his tournament she did get selected for the team again. In 2014 she won a gold medal at the World Championships in The Hague. So far Frederique has played 38 caps for the Netherlands and scored once. She regularly visits the Bovelander Hockeycamps, so grab your chance to meet her this summer!