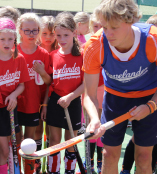 Tim Jenniskens has played for the first team of Bloemendaal HC for several years. He has played 45 caps for the Dutch Mens fieldhockey team. The London Olympics in 2012 were very special fot Tim. He was selected as reserve player but in the Semifinals of the Olympic tournament, his team mate Klaas Vermeulen got injured and this was Tim's chance to prove himself. Besides hockey, Tim and his team mate Rogier Hofman are very active for sports foundation Sports Help. This foundation organizes Meet&Greets for severely ill children with atlethes of their favourite sport. Every summer and holiday, Tim visits multiple Bovelander camps to show his trics and give the children tips to improve their skills.